Right now, I am using my Gunslinger Lagacy. It’s a fun, well-built guitar and plays great.

Do not criticize as this

Should probably just live on this one, except when I want singlecoils and pull the jazzmaster or tele out

Ooooh, I like this one!
Is that an uppercut model?

My heavily modified Mexican Squier. The original pickguard assembly checklist dates it as March of '96, making it roughly a year younger than me. Bought it when I was 16 for $200. Was just sort of my stereotypical strat for a while, but there was just so much magic in the way it played that I knew I had to try to craft it into a metal machine to better suit my own taste. The body, neck, nut, and trem spring claw are original, pretty much everything else has been swapped. I tried multiple different Seymour Duncans in it, but could never quite find the sound I was looking for. Went through a Hot Rail in both the bridge and neck, a Perpetual Burn in the bridge, and finally a JB in the bridge that I just ripped out in favor of what's currently in it, and it's never sounded better.

The neck pickup is a Wilkinson M Series High output ceramic single that I picked up from Amazon for $14.
The bridge pickup is a Guitar Madness '57 Special Alnico II PAF from eBay, $20.

The '57 is raw and savage as hell. It maybe lacks a bit of bass chunk, but that was never the sound I gravitated towards anyway. I have a Guitar Madness Overwound Alnico II coming Monday that combines specs from my two favorite bridge pups of theirs (The A2 of the '57 and the 12k resistance wind and silver baseplate of the Spirit of '76) that may end up usurping this just as quickly as it went in, but we'll see. The '57 will be hard to beat.
The overwound single coil matches perfectly with the bridge humbucker and 500k pots. Incredibly deep, rich sound that maintains good single coil sparkle. Genuinely one of the best neck tones I've ever gotten.

This is the guitar that, once I start playing, the hours just seem to melt away. I have to be careful when I play at night, or the sun will rise before I even know what happened. It's deeply inspiring.

Down in the Everglades

No. It's an Iron Label FRIX6FEAH model, with Black Winters, Hipshot bridge and Tesi Switch.

Typically my Thorn Rune is the go-to for practice, which I suppose defaults it to 'main' status.

Randy said:
Still this one. Ironically doesn't get as much play as a few of my other guitars but that's because 1.) it lives in my office 2.) It legit ruins playing any other guitar, so I try to stick with playing other stuff to temper my expectations on new gear

is the neck mega thin? I've always been interested in trying a Parker but if it's thin I can't deal with it haha

jco5055 said:
is the neck mega thin? I've always been interested in trying a Parker but if it's thin I can't deal with it haha
Click to expand...

If his is anything like the Fly I had, then it's paper thin, thinner than any production guitar you've ever laid hands on
J

MFB said:
If his is anything like the Fly I had, then it's paper thin, thinner than any production guitar you've ever laid hands on
Click to expand...

jco5055 said:
every other day I wonder if I somehow have weird hands or I hold the guitar strangely the the idea of a mega thin neck being good is the opposite for me basically haha
Click to expand...

I think everyone initially wants the thinniest guitar neck there is/could be, but when you realize what that ACTUALLY is, for most people it just doesn't work out; which is why the thickness's were seeing now are so common. Profiles may vary slightly to be more round/or have more pronounced shoulders, etc... but the actual thickness isn't different.

In hindsight, I couldn't imagine having one now, I need a little bit to latch onto but not so much that it's changing my natural position

Confirmed it's paper thing, easily the thinnest neck I've ever played. Not flat mind you, just thin. The grey is a '94, I've also got an '04 that's a little thicker and a little rounder but still in the "thinnest production guitar ever" range.

I love super thin necks, that's half the reason why this thing chases everything else off. Less about thickness, more about no shoulders, no hump. The Ibanez Super Wizard and the RG1527 neck profile both scratch that same itch for me. 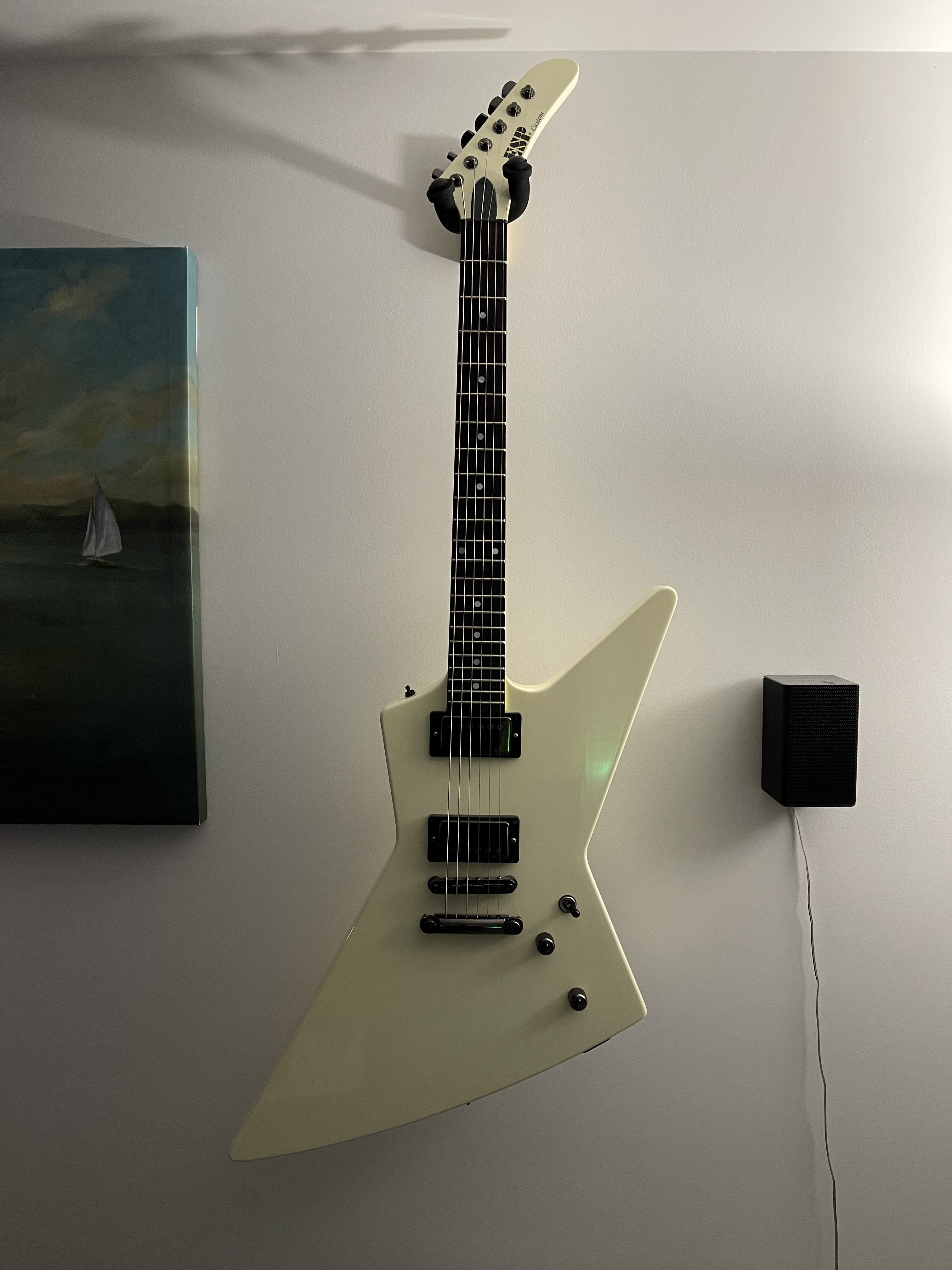 '05 MX-2. Got it in the custom shop in Osaka about 5 years ago. I had always wanted to even see one, and couldn't believe my eyes when I went in and they had a new one for sale. I was looking at it and the salesman asks if I'm interested. I say of course but $6k is more than I can afford. Then he says it's my lucky day because they just got a used one in that morning and he could give it to me for much cheaper. I ask how much and he says... wait for it... $2k Canadian!! SOLD!!!
Click to expand...

I always hate seeing this one posted...I was at that shop literally 1-2 days before you and it wasn't in stock at the time. I've hated you ever since.

My main has become an Ibanez AZ2204 in Hazy Rose Metallic. I didn't jive with the Hyperion humbucker so I replaced it with a covered Suhr DA. The Hyperion singles are actually great. It supplanted my koa JP6 as my main guitar for live use. I also have an AZ2200 that is my main guitar for single-coil usage, supplanting my Cutlass SSS. I don't particularly like Ibanez Wizard necks but the AZ necks are perfectly chunkier. As much of an EBMM fanboy as I've been over the years, the AZ series covers all the bases I need and are more comfortable.

well my dcm100 since i got it I fell in love with the shape, the look, and how comfortable the neck is in my hand, despite I have a lacs version, this still my main babe

It's not the one with the most sentimental value but it's this thing. Schecter KM-6 modded with BKP Ragnaroks and the push/pull volume had to be replaced. Otherwise the thing is amazing and I struggle to put it down. Plays itself. During the honeymoon period, even on a school night it'd be 1am and I'd be like "fuck, that's the time!?" And with the coil split it's surprisingly versatile.

(Not the best shot - don't have many post-mod pictures)

In the last week or so, this one has really started to settle in as my number 1. There is something about it . . . actually everything about it is incredible.

My black Edwards Les Paul is my main guitar because at the moment it's my favourite guitar in the tuning my band uses most (drop B). I have another Edwards LP that I think I like a bit better sound and feel wise but I like it a bit less in looks (it's a sunburst). That is my main drop a# guitar, the other tuning my band uses, but we have less songs in a#.