Don't know what to make of this... 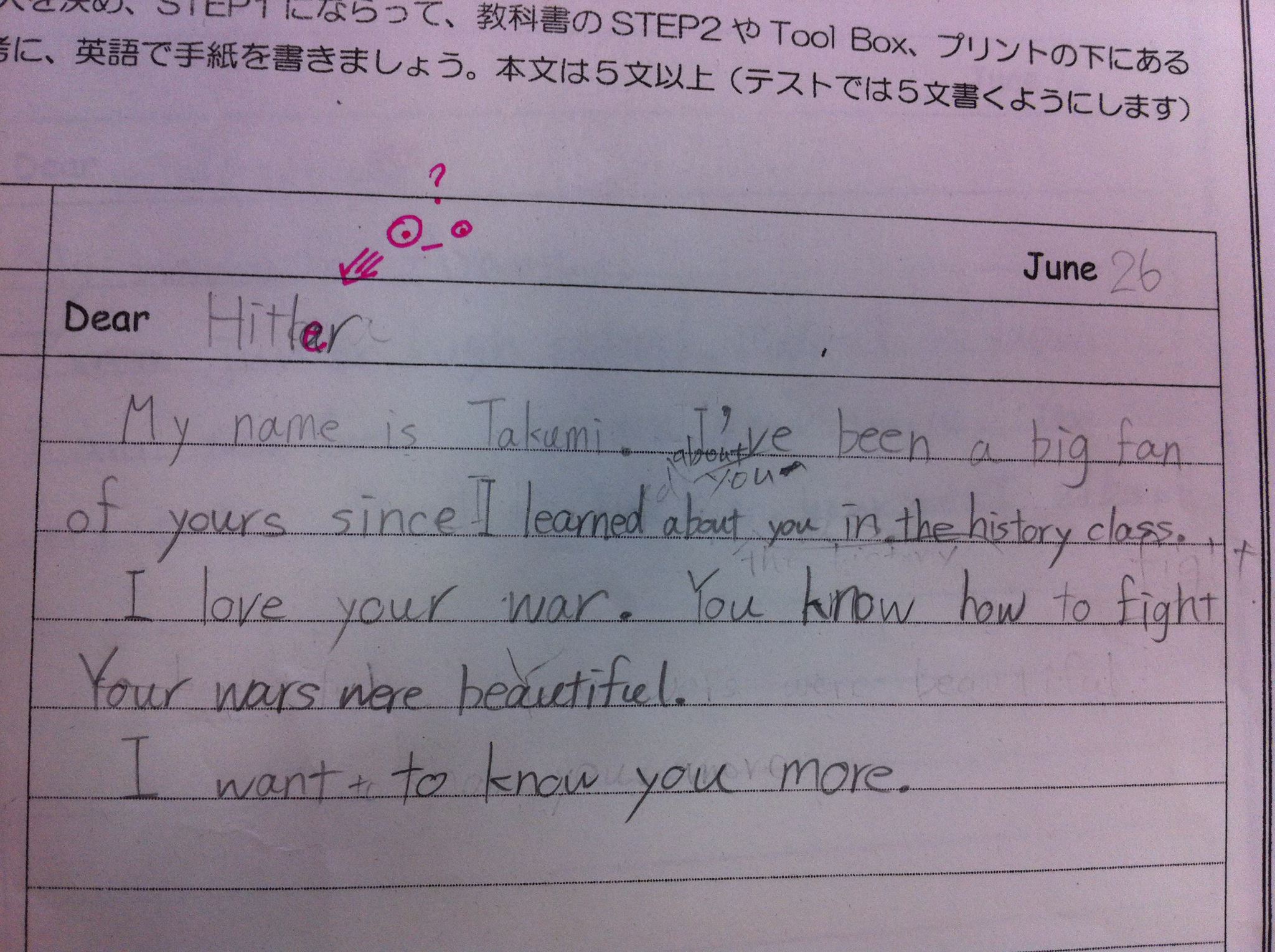 Well, obviously there are still Nazi's even in Japan.

My main concern is that the teachers only comment was to correct the spelling of Hitler...

Hitlar as used in a sentence.

Submitted on June 26 by Takumi.

Neil said:
My main concern is that the teachers only comment was to correct the spelling of Hitler...
Click to expand...

Given that this appears to come from Japan? The teacher may not have understood the import of the letter.

I'm more stund by the fact that a Japanese student has better english handwriting than 90% of Americans.

His manuscript actually blows mine out of the water.

But I've been writing exclusively in cursive since the second grade, so I have somewhat of an excuse.
N

The Atomic Ass said:
Given that this appears to come from Japan? The teacher may not have understood the import of the letter.
Click to expand...

Wellthe letter is in English, and is written on a template with 'Dear' and 'June' written on in English, I'm guessing it was an English lesson, and that the teacher should at least understand English.

My guess is, the kid didn't understand the history text he was supposed to have read for this exercise. Maybe he's in an English language history class, and he had learned enough English to string a few sentences together to try and get the teacher to think he understood what the source material was about, but obviously either didn't get it, or didn't read it.

I once did a French language book report without having read even half the book. I acted like I understood it a lot better than I did.

ilyti said:
I once did a French language book report without having read even half the book. I acted like I understood it a lot better than I did.

I am sure that it wasn't a very successful report. Actually it sounds like a disaster!!!

I didn't get a very good grade..

About 15 to 20 years ago, I found out from a Japanese friend that "The Diary of Anne Frank" had become a major seller in Japan. A lot of people identified with Frank, because of the way the rest of the world had treated Japan during WWII.

There was, and stil might be, a huge amount of censorship regarding Japan's actions during WWII. Things like forcing Chinese, Korean and other women to be brutally raped unpaid whores for Japanese soldiers is something known to few Japanese I knew during the '80s and '90s, for example.

With that personal knowledge, I fully believe it is possible that there isn't a stigma attached to admiring Hitler in Japan.

All in all Hitler though an absolutely mind bogglingly evil man was a very intelligent and resourceful guy. You have to look at where the man came from and his determination to force his ideals and the ideals of his party to truly "apreciate" (and i use that word lightly) his work ethic and strategy.