For Christmas of last year I got myself a Caparison TAT Special 7 FM.

When I was shopping around, I decided to treat myself. I gave it a 'sky's the limit' budget and decided to buy the ultimate guitar. It had to have seven strings, 25.5 inch scale, a floating bridge, passive pickups. That doesn't leave a lot of choice, but I was still left with some impressive guitars. I was thankfully able to extensively try out some stuff like a Music Man Majesty, an Ibanez j.Custom, but also stuff like a PRS, a Strandberg, E-II and so on. The only one I wasn't able to get my hands on was the Jackson Chris Broderick, but eventually, my choice fell on this.

It's a great guitar, and now that I've had it for a little over a year, have recorded an album with it, and really gotten to know it, it's time for a long-term review. I'll split this up into two parts, the good, and the bad, so here's some things I love about the Caparison Tat Special 7 FM.

Headstock
We have to start with one of the most iconic features of Caparison, the Devil's Tail headstock. While it's black, and could have looked cooler in a matched figured wood finish, it's clad in this sandpapery black material which looks really interesting. The headstock also has parallel string paths, and is a smaller headstock overall than the Jackson one - no more knocking things over. 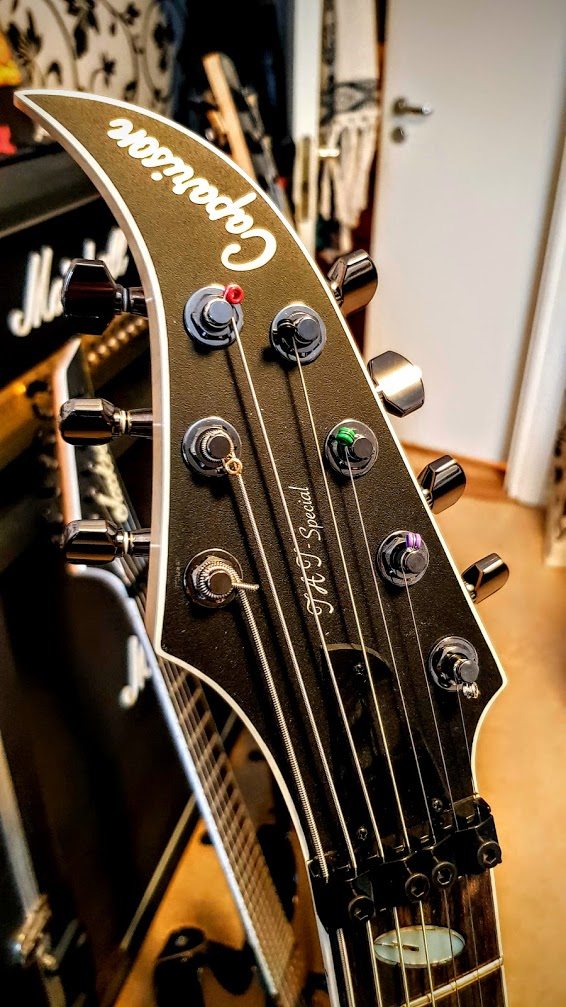 Volume knob placement
I like using pinky swells, and this requires a volume knob that's close to your picking position and is out of the way of the whammy bar. When trying out guitars I found that some did this well, others didn't. Something like an Ibanez RG has this nailed, but a Music Man John Petrucci just can't do this. The Caparison IMHO has a great position for this. The knob is also not recessed, and it's a bigger style knob so it's really easy to find with your pinky. 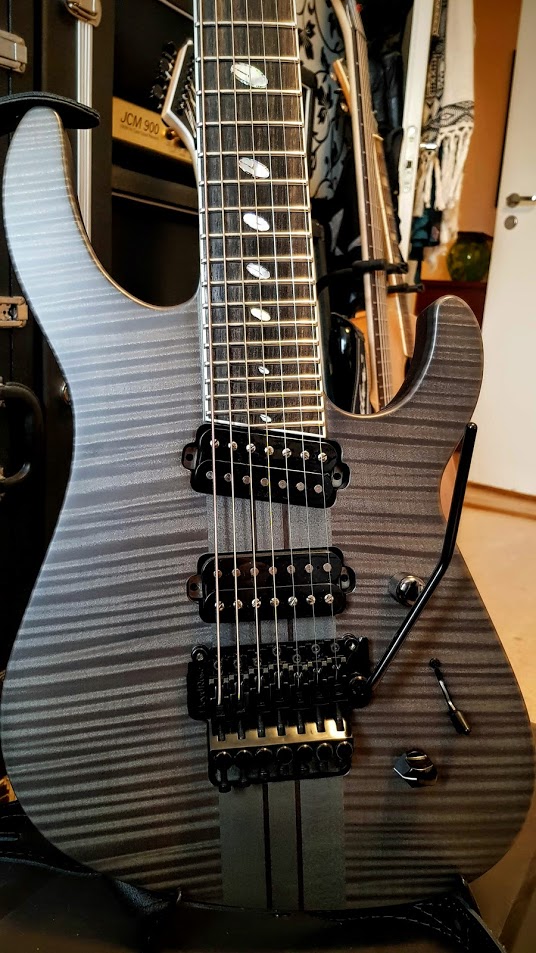 Neck
The neck profile is what really sets Caparison apart from other shredder-type guitars. On an Ibanez, Jackson, what have you, the neck is fast and thin - this neck has a really thick, round, chunky D profile, almost a U profile, and I find that really comfortable to play, especially for a seven string. There's no volute to get in your way, and the headstock cutaways are nice and big. Fretboard side there's an ebony, compound radius fretboard, just like on a Jackson, and these amazing clock inlays with the hands of the clock corresponding to the fret number, all the way up to fret 3 am - 27 frets, that's insane. The frets are the biggest I've seen in a while - not stainless steel though, but what's cool is that 27 frets means I can tune this guitar to drop F#, and have in seven strings, the full tonal range of an eight string guitar in standard tuning. That's incredible. Caparison are just about the only people who make guitars like this. 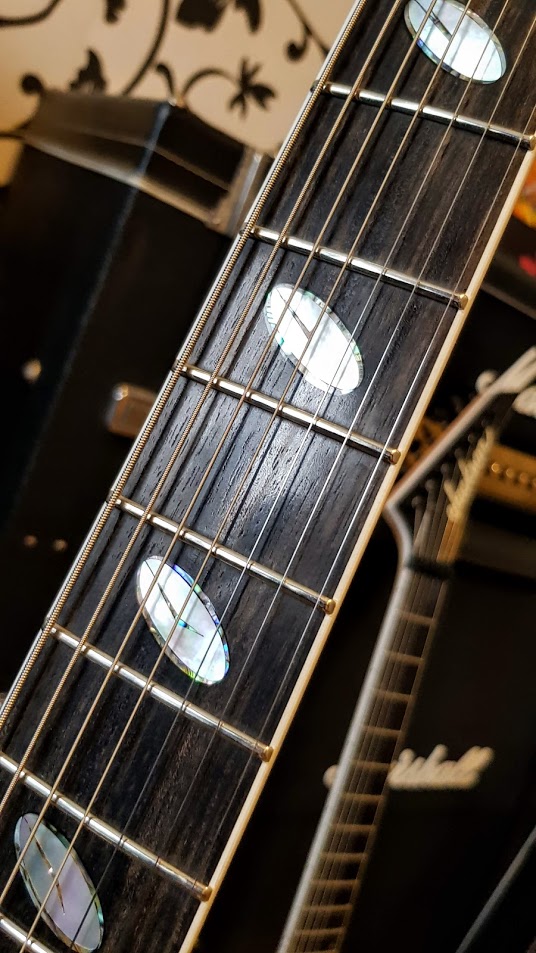 Pickup switching
The party piece of this guitar is its ability to sound like anything. It can sound like a Les Paul with its Alnico humbuckers, it can sound like a Stratocaster with its coil split position 2 and 4 imitation, and it can sound like a Telecaster with its twangy split bridge humbucker. The secret weapon for this is a rotary knob, which gives you four different ways to voice the middle position of the pickup switch selector. It allows you to have either of the pickups coil split, both coil split a la Stratocaster, or both pickups in standard configuration. It's an incredibly versatile setup and more than anything, it has me reaching for this whenever I need to record something. 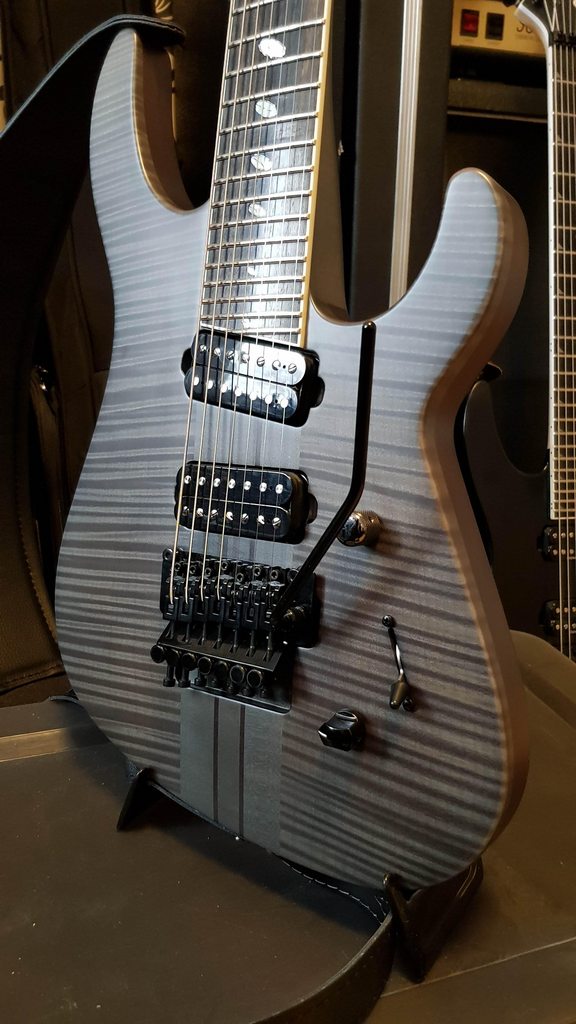 Woodwork
This whole guitar is a love affair with wood. It's that delicious marriage of mahogany and maple, with a big slug of maple neck running through the body, some walnut stripes, and a pair of mahogany wings which come out beautifully in this satin finish. Then, a 5/8 inch flame maple cap, and just look at this thing. Look at how thick that maple is! It's also just barely painted so you can feel the stripes with your fingers. 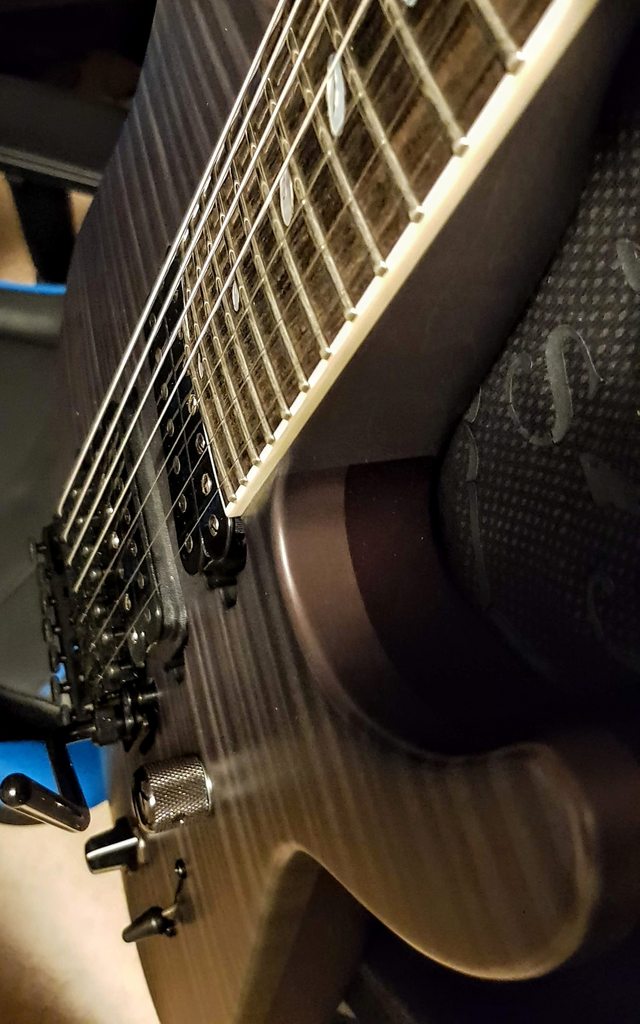 
After all of the positivity you might be interested in some things which I think need improvement on this guitar.


The heel joint
The Caparison TAT is a neck-through guitar, that's what TAT stands for - Through and Through. One of the main advantages of a neck-through design is that you have supremely comfortable upper fret access, because you don't need a cumbersome bolt pattern joint with a neck plate, or a tenon. So, when a company comes out with a 27 fret guitar, and an offset body to allow for even deeper cutaways, you know that neck joint is going to be sublime, right? WRONG. Look at this thing! This is an absolutely massive neck joint, that juts out like a square piece of wood and feels pretty awkward in the hand. Now, is it a deal breaker? of course not, or noone would play bolt-on guitars, noone would play Les Pauls. Of course you can make it work. But with other companies out there like EQ and Ormsby designing ultra-accessible necks, this honestly is a design decision that has me stumped. 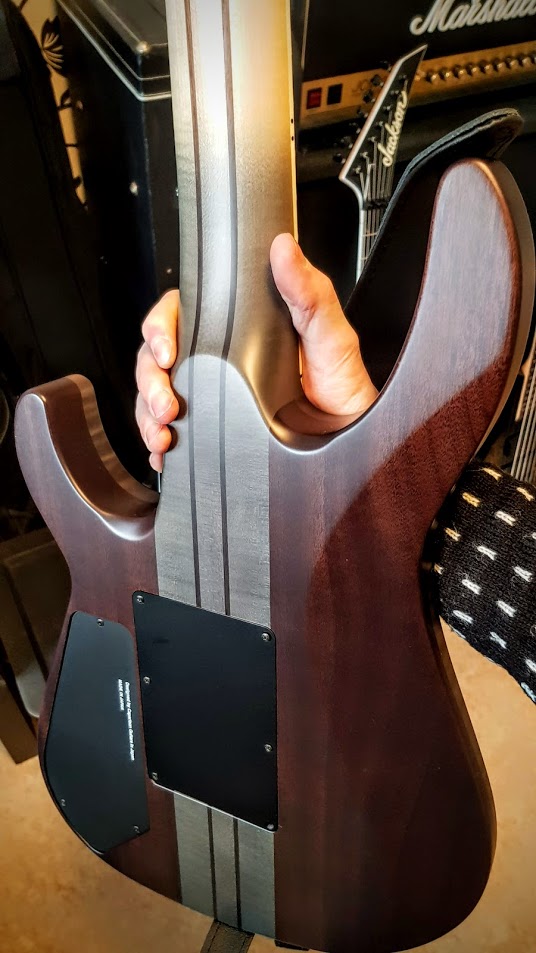 Price
Let's not beat around the bush here, these are very expensive guitars. Sweetwater has this model for sale at four thousand dollars. That's serious money however you look at it. I got a demonstration model from Thomann at a good price, otherwise this would still be unreachable for me. And as good as Caparison are at building guitars, the brand isn't that well known. I'm not sure that anyone I sold this guitar to would know what it was, and why I'd be asking so much for it. End of the day, it's not a Gibson, it's not a Jackson Custom Shop. It's not made in the USA, but it costs like it is. Now, it's made every bit as well, it really is, but I'm not sure that people necessarily get that.

Pickup switching
Bear with me. I know pickup switching is listed above as a thing I really liked about this guitar, and I still do. With this guitar, there's a three way blade switch, with bridge, and neck positions as normal, and then the middle position passes the ball to a rotary knob, which gives you four positions. But... when you add all of that up, that's six options. That's just one more than a regular five way blade switch would have gotten you. So why didn't they use a five way switch, and a knob, for more options? We could have had parallel vs serial, phase vs out of phase, all sorts of combinations. This seems a bit of a waste of a great idea. 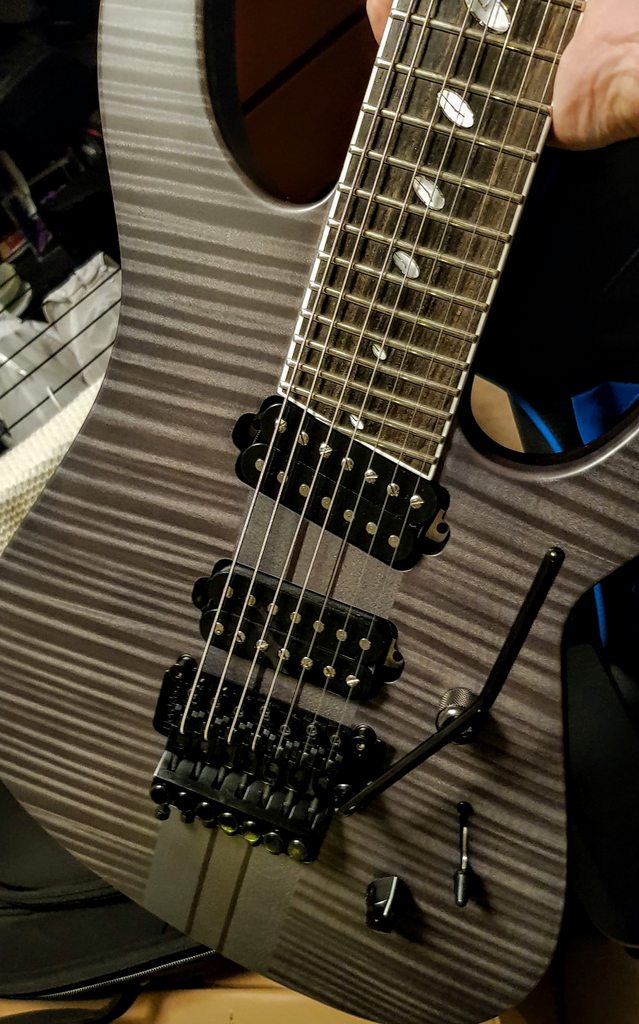 No tone knob
I know a lot of guitarists don't like the idea of a tone knob - they suck high frequencies out of your tone even when they're on full - so I can see what they've done here, they give you the full signal and they use the tone pot position to give you more pickup switching options. But there's ways around this. They could have used a tone knob which is bypassed until you pull it up, or have a knob that bypasses when it's turned all the way up. Instead they gave the whole knob a miss, which is weird for a guitar which is trying to be so versatile.

Neck pickup
This guitar has 27 frets, and that allows for some awesome tuning options, but it also means that the neck pickup honestly is too close to the bridge. They've done everything they can, slanting the pickup, and all, but you can't beat physics. In an LP, the neck pickup is just off the 22nd fret. Even on a 24 fret guitar you're giving up some real estate. On the Capa, it's five frets off. In fact, it's close to the position of a middle pickup on a Black Beauty and that's not a sound I've ever been able to make useful. 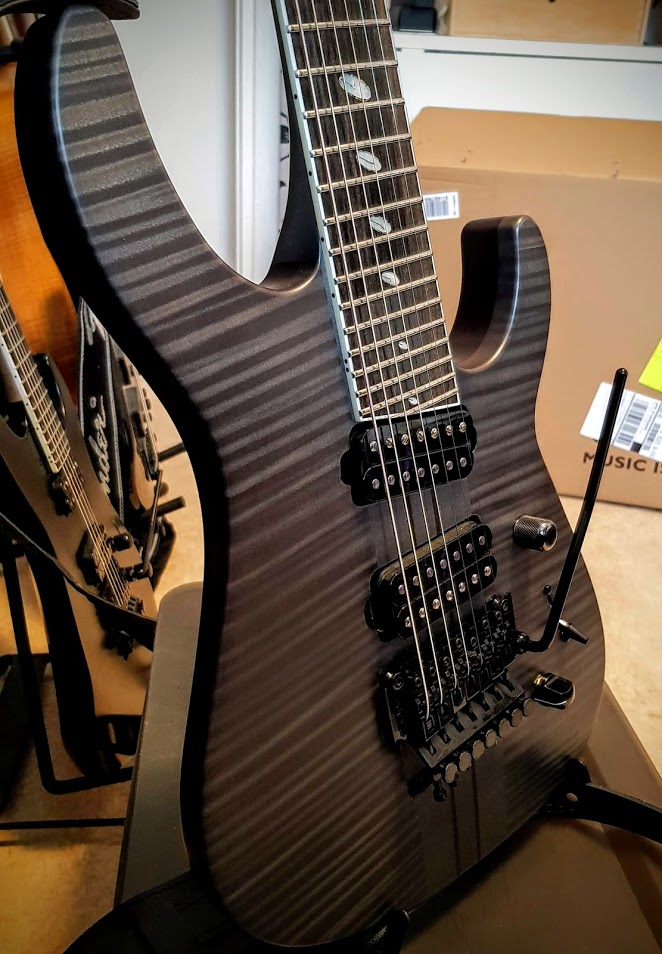 Intonation (scale length)
I have some problems with intonation on this guitar, and that has to do with my own decision to buy it and use it the way I have. This is a 25.5 inch scale seven string guitar, which is problematic to begin with, but I've compounded the problem with the fact that I play in drop F#- that's as low as an eight string guitar in standard tuning goes. Asking a 25.5 scale length guitar to reliably intonate in F# is problematic. The reason I do this is that 99% of the time I play it like a six string. I am essentially a lead player, but I like using the seventh string occasionally. A long scale guitar compromises lead playing, and multiscale guitars are generally not available with a tremolo arm, so 25.5 it is. It's things like this that make me ogle the Rusty Cooley Ormsby guitar which has managed to marry multiscale and Floyd Rose.

Hope you enjoyed this folks, it was fun to write!

Here's a video I recorded with the guitar:

Amazing playthrough and great review man. Have always been a fan of Caparisons!