I started playing computer games back in the 80s and every once in a while fiddle around on youtube looking for retro gameplays. Ultima IV-VI, Trapdoor and many other classics.

What are your favourite retro games of old?

Fallout, Fallout 2, Baldurs Gate 2. I had an awesome time plying those. If there was an option of deleting my memory of those games so that I could play them again for the first time, I'd go for it in a heartbeat.
M

Good choices, I'd include Planescape: Torment there as well Actually begun playing the remake some time ago, still fun

How retro we going? Zork?! Zork was great, but hard to play now that graphics are a thing. I loved Scorched Earth. Commander Keen was fun, too, but a tny bit more recent. Beyond that, Doom and Soom 2: Hell on Earth were, by far, the best games of their era. If you like free-form games with optional missions, Privateer was a great outer-space game; it was part of the Wing Commander expanded universe, but, on its own, a great game.

My absolute favourites from the 90s: Secret of Monkey Island 1 & 2

Ya ya ya I am Lorde

We can as retro as we want! Star Control 2 was a true classic indeed and the NES era had many classics as well. Megaman series would probably make players nowadays to just quit in rage after a few tries, they were so damn hard and unforgiving. No hand holding at all.

With Ultima IV I remember that we had a massive paper folder we wrote by hand that was effectively the journal / quest log that the games nowadays present you automatically. We also had to write down the maps of the dungeons on our own.

Wing Commander II especially was one of the best space sims back in the day and Privateer was a good continuation of the concept. But the very first Elite on C64 was totally mind blowing experience. It was unfathomable how something of that scale was able to be played on such a simple machine.

Michikawa said:
Good choices, I'd include Planescape: Torment there as well Actually begun playing the remake some time ago, still fun
Click to expand...

Yeah I never played Torment, but have bought it some time ago and is high on my to-play list

The first computer game I played was Zork. Has anyone else here ever played it? I'm not even sure you can find it in any operational format anymore. 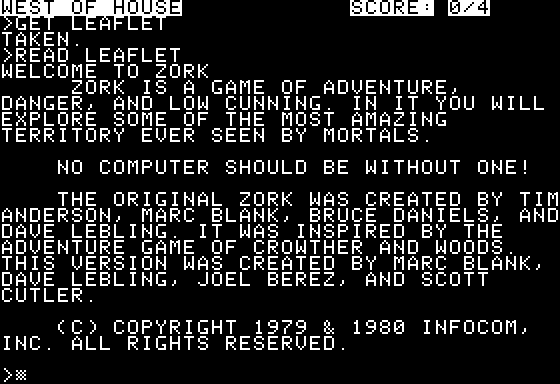 A little later, Wasteland was a really fun adventure

Rogue was a great concept for it's time: an RPG where the world is totally reset when you die, as in, every time you play, the game is completely different.

I think all 80's kids remember the following:

Where in the World is Carmen Sandiego
Oregon Trail
Sim City
Lemmings
Maniac Mansion (there was also an NES version, but the PC version was better)
Paperboy (also on NES)
Q-Bert
Space Invaders
Gorilla

If you don't know any of these, check them out. They were all famous for a reason. You start out by taking over a ship. Then you sail around the Caribbean looting towns and attacking other ships, eventually obtaining treasure maps and digging up the treasure. There are tons of side quests where you can reunite with your lost family and get married and own your own land. It's really free-roaming, so you can be as good or bad as you want to be, and the game will react to most of your in-game choices quite well. It was extraordinarily cool for its time. It might be a little boring, after awhile, for people used to FPS-type games or platformers, but if you have some patience, this game is super entertaining. 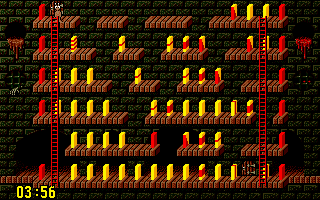 This is a pretty basic concept puzzle game, but it was loads of fun. Dominoes are set up, some of which do special things, like split in half or tumble or explode. Your character needs to push one domino in order to make sure they all fall down to solve the puzzle.

Who doesn't love solving math problems in a video game?

Actually, this game accomplished what it set out to do, at the time, very well. You're given an instruction (in the screenshot, to collect multiples of four), so you traverse the gameboard, avoiding enemies, evaluating which numbers meet the condition (z.B. "28"), and not trying to collect the other numbers. Succeed in collecting them all and you'll be rewarded with a cutscene that looks like it might have been a rejected roadrunner/coyote script. Still a fun way to get some arithmetic practice and pass some time.

Pick your tank, pick which bombs you want to load, buy shields - fight. Turn-based tank battle, where you input the angle and velocity of your projectile. If you are good at physics, you can finally beat your friends at something!

I don't really know what to say about this one. It's basically a bunch of minigames and almost all easter eggs, with little exposition, but the gameplay and visuals perfectly fit with MPFC. 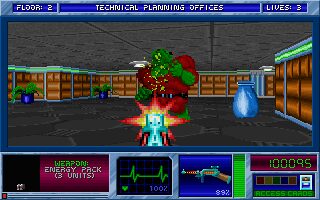 Like Wolfenstein 3D? Tired of Duke Nuke 'Em 3D? You probably never heard of this one, but I love this game. It's gory, gross, sci-fi, old school FPS action.
V

And of course those big Star Wars machines you'd sit in.
Old-school vector graphics rules! It's all about creating illusions in the mind.

Still love the older Silent Hills and Resident Evils too.

vansinn said:
Tempest (the one with the program error that could be hacked while playing) and Tron

And of course those big Star Wars machines you'd sit in.
Old-school vector graphics rules! It's all about creating illusions in the mind.
Click to expand...

omg I miss the old star wars machines, those were so much fun. If we're including arcade machines then I have to throw in afterburner, galaga, Virtua Fighter and Primal Rage. I spent so much money on those back in the day.

Zelda and Metrioid were my favorites back in the day for Nes.

Older PC games I loved were Phantasmagoria, Dark Forces, the 11th Hour (one of my all time favorite games), Full Throttle (badass motorcycle based game) and the Might and Magic series, particularly the Light and Darkside of Xeen.

I've spent a bunch of time with that one, and a bit of the sequel. I have the 'throwback pack' version on steam, and also copied them to my phone (since it's just dosbox, you can run the steam copies anywhere). I have wolf and doom on my old iPhone - it would be cool to find a way to extract the wads/data from those and play those anywhere.
M

I have a bunch of arcade games that I really have a soft spot for from back in the day . a few that spring to mind


but if I pick one as my fav it would be Rygar . loved that game. the look , the sound of it and the gameplay . you just got in the moment and flowed

Only obsesses over guitars when not playing them.

TedEH said:
I've spent a bunch of time with that one, and a bit of the sequel. I have the 'throwback pack' version on steam, and also copied them to my phone (since it's just dosbox, you can run the steam copies anywhere). I have wolf and doom on my old iPhone - it would be cool to find a way to extract the wads/data from those and play those anywhere.
Click to expand...

You most likely already know, but Blake Stone ran on the Wolfenstein engine, so data was packed the same way, so most, but not all, Wolfenstein hacks worked in Blake Stone. I made a map editor in Turbo Pascal way back that worked for either one, and I found a texture editor on a bulletein board that worked great for Wolf3D but not really so much with Black Stone.

Same for Heretic and Doom, and I've heard for Hexen and Quake, although by then I was less interested in fiddling around with editing maps and sprites and whatnot. Heretic had a great mechanic, though - if you had a weapon called the "hellstaff" and a powerup called the "tome of power," you could shoot an enemy and cause lava to rain down on the from the sky. There were tons of mod opportunities with that mechanic. But my favourite ridiculous thing was the mummy's (or golem or whatever) death frames of their sprite was such that a ghost came out as the bandages came unwrapped. The ghost's frames could easily be readdressed to other frames, so you could have another mummy (or whatever it was) emerge from inside the other, to have an essentially immortal enemy in the game. Not that it was fun to play through the game that way, but it made for some good laughs.

EDIT: It was a golem. Just goes to show how much imagination you had to use with old games. The golem, to me, always looked like a mummy.