I searched and was surprised to see there's no actual thread on them, there's only a few NGDs.

I thought I'd post it in the ERG subforum, since they do make 8 strings, even though I'm only into 7 strings.

But anyways, what's everybody's opinion on them? The Arium/composite material and the fact all reviews seem to be glowing has me very interested, but honestly I like a little more options/ergonomics with it, at the very least having a multiscale option for the 7 string.

I have heard that they apparently are working on a multiscale 7, and have heard they are making a headless but haven't heard much else/updates.

Currently they do not offer multiscale outside of their 8-strings (keyword currently). As for what you heard, well, until it's on the website, it's not out there really...

As far as options go, you ARE 'stuck' with the Arium/Richlite combo, but you can decide bridges (Floyd, Hipshot hardtail, Hipshot contour trem), all electronics and pickups and, for a price, you can even request some cool inlays, who knows. Always worth asking.
The ONLY thing I wish mine had... is slightly more rolled-off fingerboard edges. That's it. They're comfortable, not too heavy (I'm used to super lightweight guitars, so to me, they feel heavy. But compared to your standard Strats or LPs, they'll feel just right).

My 060 is great. Plays super nicely, it's loud as hell and super stable.
My 070 is somehow better. It's just insanely good. Tight, powerful, but equally capable of subtlety. A stunning instrument. Just... wow... I never get tired of being impressed by it. I don't play 7s all that much, unfortunately.

My second 060 will replace the first, for low tunings. The 020 MAY replace my KxK DC6 and Vigier GV (though honestly, replacing the Vigier may be tough game even for an Aristides).

I've also been to the factory a couple of times; the folks there are fantastic and ordering your guitar is painless and fun.
I'm far from a fanboy (seriously, just head over to the Ormsby and Kiesel FB groups for that... yikes), but I can't say good-enough things about Aristides. Everything a modern guitar company should be.

I recently saw a multiscale 060 on their Instagram so I would ask if it's possible on a 7, or just wait a bit and see what happens.
P

It's all about timing Right now it's not an officially released model.
Z

OK how much these go for to order new? Maybe I'll order one instead of the Kiesel build. Should I wait for headless model? I really want headless guitar and dont want the Mayo Hydra or Strandberg. Its the Kiesel or wait for this

No headless model in production, "ever"

according to them. I don't think they're interested in that market honestly.

My friend had an 020 and I got to put a lot of time into it before he sold it, I'm not an LP guy so I didn't gel with it at all. I liked the thicker neck and smaller frets but everything else wasn't my style being that I'm a super strat player. And pott is right, they did a test run with repeat customers on the Multiscale 6 and 7's but it'll be up for the public soon enough.

My pair has become my main set of guitars, and it's a product of just living in an area with climate that changes drastically. So when I come home from work, I don't even have to fine tune mine because they just never move. It's actually kind of insane, I always just strum a G chord and double check the tuning but they're always dead center perfectly in tune. The setup never changes too, so that's another plus you set your action and you can get it extremely low because you'll never develop bow in either direction causing buzz when the necks on wooden guitars eventually move.

It's kind of a joke, but my 060 is literally set at 0.7/0.8mm @ the 12th fret on the high string and 1.3/1.4mm @ the 12th fret on the low string. 10-52's in Drop C and it fucking shreds harder than any other guitar I have, I have another Drop C guitar with slightly higher action so I get more tension and I can riff & dig into my strings a bit more. But playing my 060 makes me want to learn lead shred all day long because of how well it plays. My 070 is a bit higher, 1.0mm @ 12th High E, and 1.6/1.7mm @ 12th Low B String but that's close enough that it still shreds. I've grown acustomed to my 070's 26.5" scale but I wish 25.5" was an option since that'd be in my comfort zone. I don't play in Drop anything so I don't need crazy tension, just 10-56 in B Standard and I'm a happy guitar player. But yeah, never having to tweak and just pick up and play, it's really hard to beat these things. I'm ordering a pair of floyd 060's to replace my other mains in the tunings they are set to. I need a guitar in E Standard with a Floyd, and another in Drop B or C Standard.

I'm a huge fan of them, and I can't say good enough things about the team. We'll have skype calls all the time and Pascal will show me some crazy new finish Rodney is working on and I can catch up with them and how everything is going from time to time. They're good people making killer guitars, and they honestly haven't had a case of a poorly built guitar in the last 3 years of me paying attention to them, the only time things have gone wrong is mishandling by Fedex while shipping and the first times this happened they put time and effort into how they could minimize that. New cases, new permits and shipping procedures, and ever since I've only had a good experience. I expect this next pair to go just as smoothly, hopefully I can take time off to travel and pick them up in person whenever they finish.

These are my two babies, I've had 8 or so total at this point though between orders and buying used from other members to try models and see finishes in person. I had a few other 060's, an 080s, and the 070 that this one pictured replaced after Fedex decided to tear my package up! 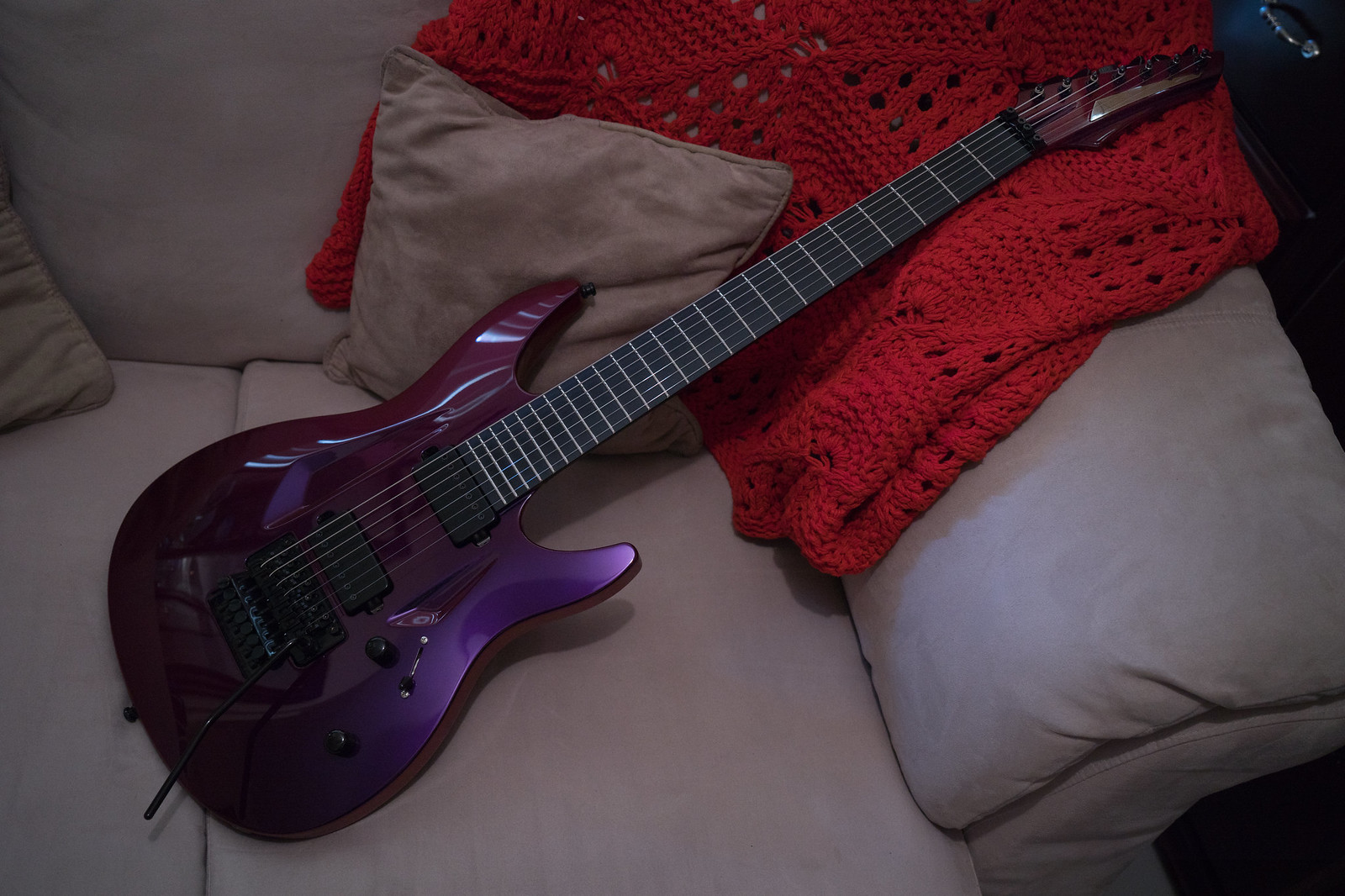 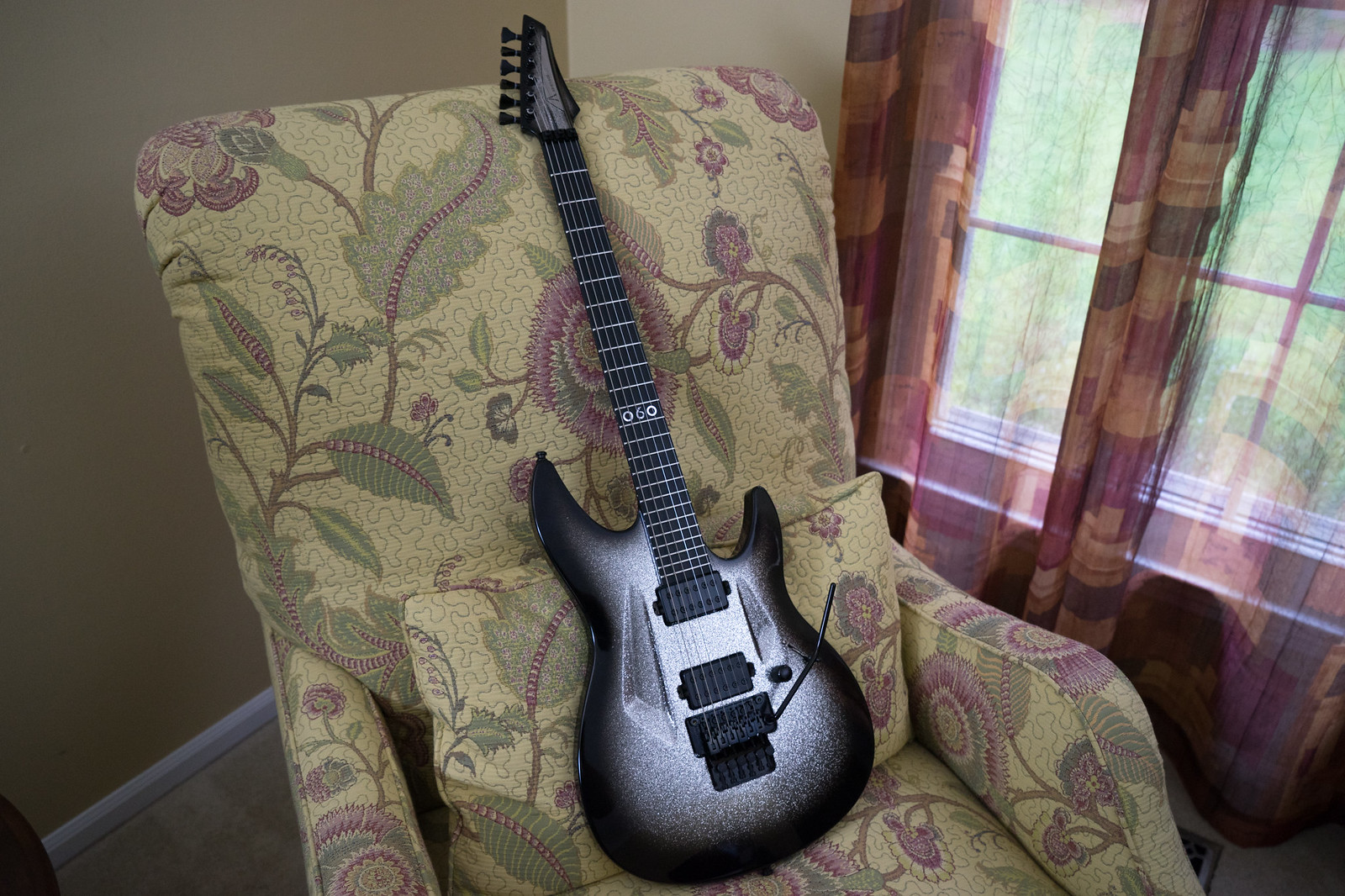 And my old/sold ones
My first 070, that got damaged by Fedex and replaced

My 2nd order, the Chameleon Blue/Green on an 060. Really classy build, loved the color. 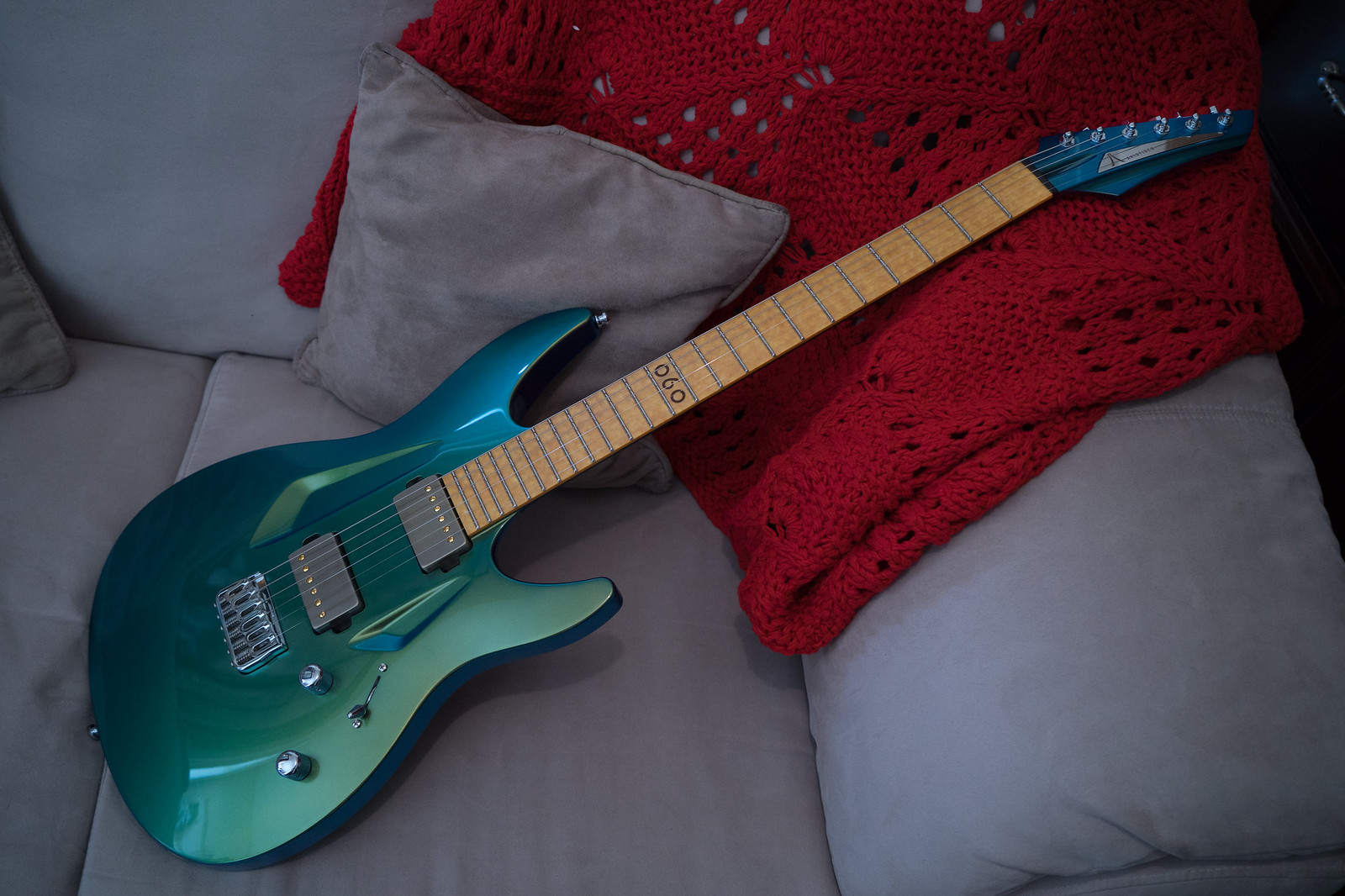 My 3rd order, the Aqua Sparkle SSS which was my little strat killer. 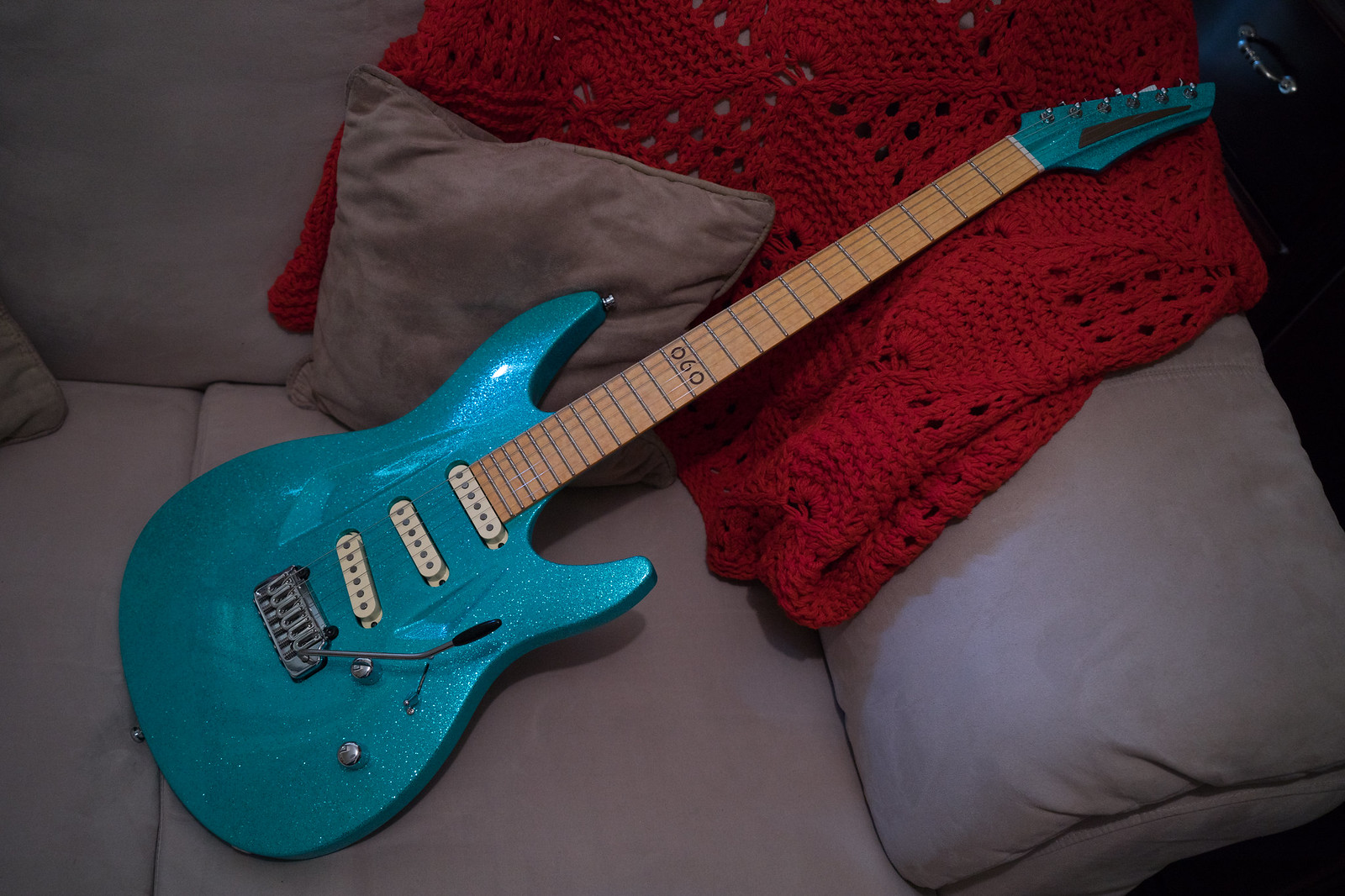 And then the builds I got used from friends or other people online.
The mighty 080s, this thing was a BEAST but far too big for me. The scale length combined with the sheer size of the guitar itself was more than what I enjoyed actually playing on. 28" - 26.5, fucking massive. 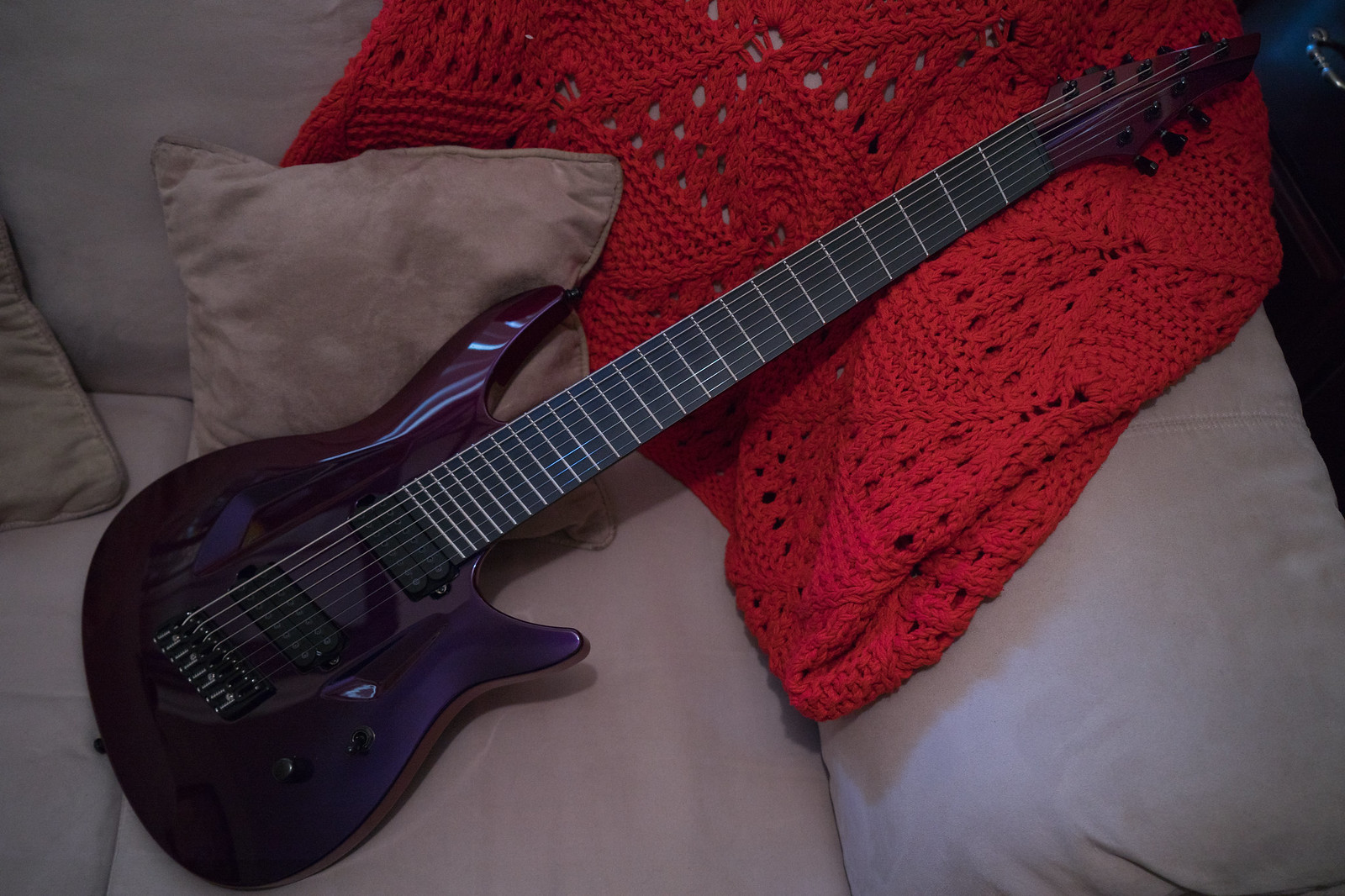 And then the White Marble 060, wasn't the biggest fan of the overall specs and aesthetics choice but picked it up to see how a marble looked in person. 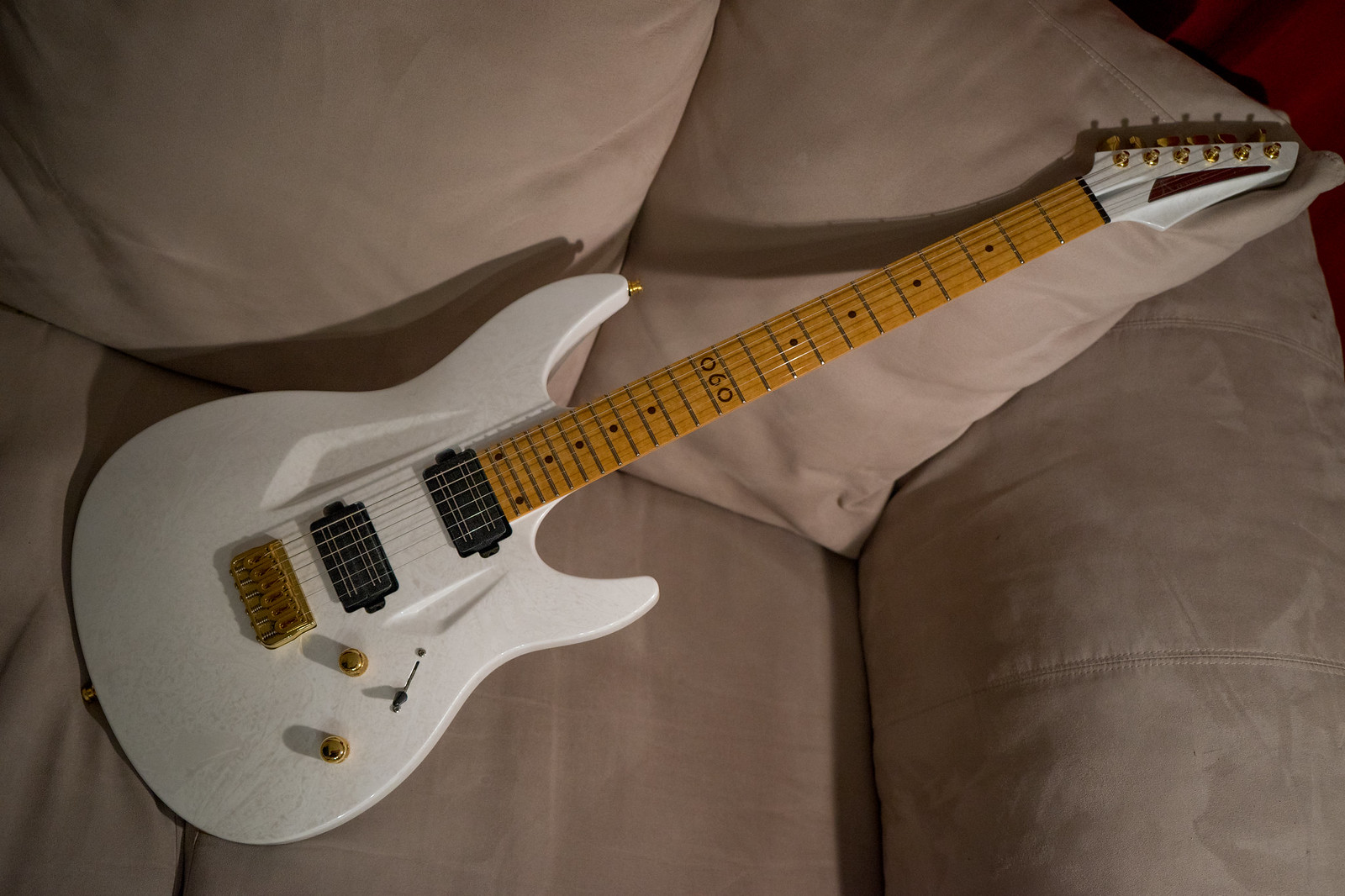 prices go up really fast if you order options.

I dunno you should really be cross shopping a kiesel and an Aristides though. Unless you are going full idiot on options the price difference is pretty large.
Z

OMG those are insane! Maybe I get the kiesel for headless and order one these! I need that sparkles

I've heard a lot of praise about them and most people go back for seconds and thirds. Its great to have another guitar company with a high level of QC, good communication and build times.

If the multiscale is 25.5 - 26.5" I might go for one in the future in some sort of snowstorm finish. Or if they start doing swirls that would satisfy my Universe GAS.

I have that purple 080s now and it's the best 8 string I've ever owned, one of the few brands that actually lives up to the hype.

If I could get a 070s in galactic sparkle I'd be super happy. Maybe next year...
J

I also heard back from them, yes you can get a multiscale for any of the string options, the 7 string is 25.5-27", and they don't have any plans for a multiscale trem option.

I am really tempted to maybe get one and also get a strandberg esque guitar, I like ergonomics and all that, but the idea of climate having no effect etc is almost too good to pass up.
J

pott said:
I'm far from a fanboy (seriously, just head over to the Ormsby and Kiesel FB groups for that... yikes), but I can't say good-enough things about Aristides. Everything a modern guitar company should be.
Click to expand...

I've only been around two, but they were both immaculate. Great fretwork, balance and fit & finish.

That said, personally, I think the body design, the "speed holes" are ugly.

If they ever make them with an optional to remove them I'd likely put an order in. Especially since I'm without a great 8 at the moment.
I

MaxOfMetal said:
I've only been around two, but they were both immaculate. Great fretwork, balance and fit & finish.

That said, personally, I think the body design, the "speed holes" are ugly.

If they ever make them with an optional to remove them I'd likely put an order in. Especially since I'm without a great 8 at the moment.
Click to expand...

I think their mould already has the speed holes and a new mould without them would probably not pay off. Probably better to invest in a mould for a totally new model.
I

I play music said:
I think their mould already has the speed holes and a new mould without them would probably not pay off. Probably better to invest in a mould for a totally new model.
Click to expand...

Oh, I totally get it. I just hope they get successful enough to do it.

A different bass shape would be cool, but enough about the day dreaming.

I think Narad posted one with the speed holes removed and it looked quite odd.


jco5055 said:
I also heard back from them, yes you can get a multiscale for any of the string options, the 7 string is 25.5-27", and they don't have any plans for a multiscale trem option.
Click to expand...